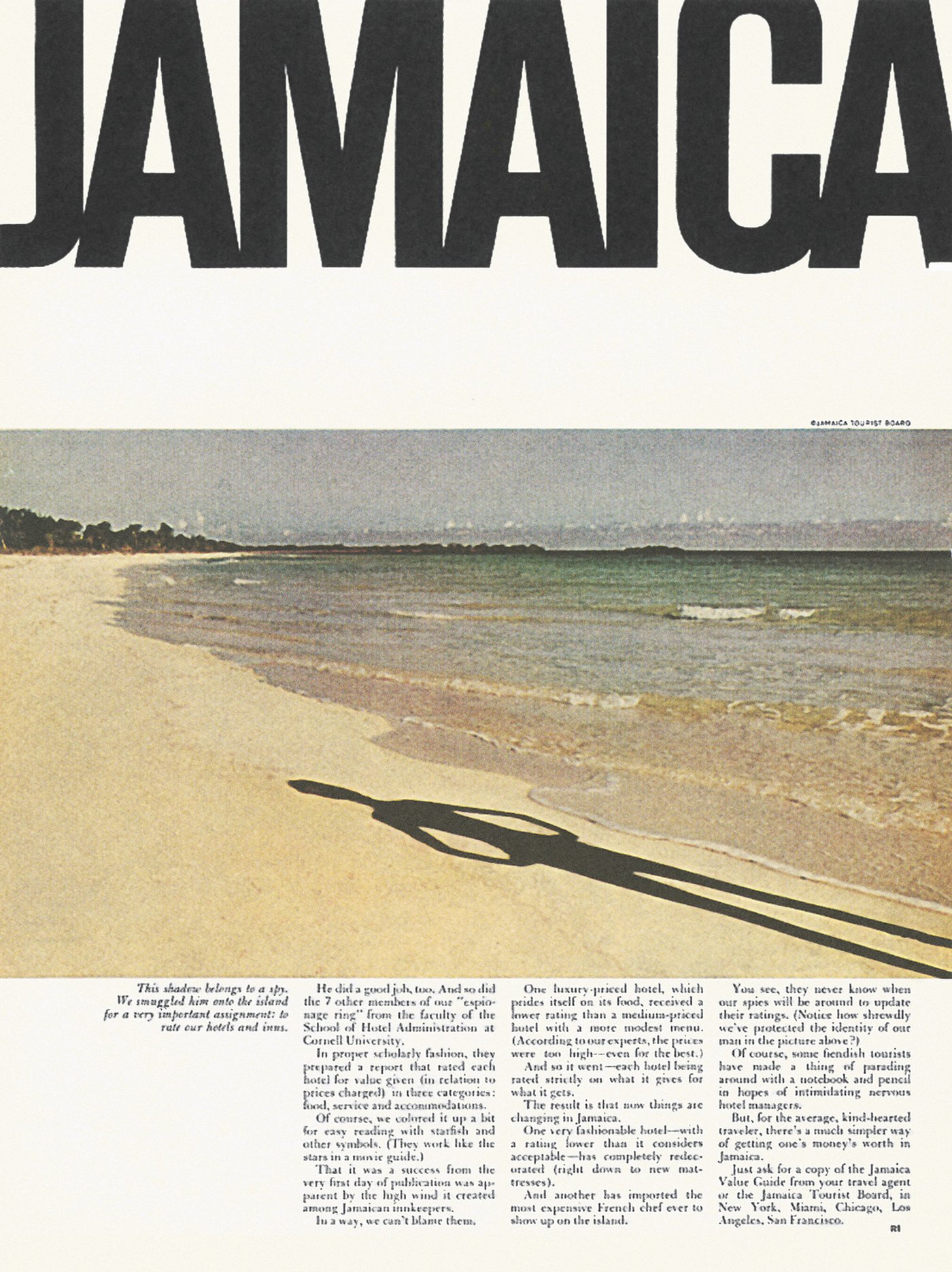 Maybe it comes from some kind of deep psychological Darwinian survival mechanism about following the herd. Ironically, that kind of behaviour is likely to kill your ad campaign stone dead. Blending in is great if you’re a zebra roaming the Serengeti, avoiding ravenous lions. But if you want your ad to be noticed by someone who doesn’t give the remotest toss about your brand (that’s everyone by the way), you certainly need to stand out.

Those geniuses at Doyle Dane Bernbach, New York in 1965 knew that of course. And that’s why their work was more modern than the stuff you did last week. However many hashtags, urls, hyperlinks and QR codes you plastered all over it.

This timeless layout for the Jamaica Tourist Board is a case in point. It has upside down art direction. And that’s why it’s different. And brilliant.

In some ways of course it’s rather conventional. A holiday ad featuring a picture of a sandy beach. And a four column grid with a squared-off picture. But in other ways it’s as radical as can be. Here’s why.

The word ‘Jamaica’ serves as a logo. But it’s not at the bottom of the ad, where logos usually live, it’s at the top. And it’s not tastefully small, or even some half-arsed compromise of a size that no one’s particularly happy with. No, it’s massive. Filling the entire width of the ad. So large in fact that it makes the page look like editorial design, in a very good way. (Native advertising, eat your pathetic heart out.) I love the beautiful sans serif type, the considered kerning, and the fact that it’s cropped by the trim at the edges of the page.

Directly beneath the ‘logo’ there’s er… nothing. Wonderful. In beautiful contrast to the bold black condensed lettering, we find an elegant strip of empty white space. And beneath that, a nicely composed colour photograph of an attractive beach. Made unusual and more interesting by the addition of a somewhat sinister long shadow of a human form. It’s intriguing and is also a very cool dramatisation of the sun; a pretty vital ingredient for any Caribbean vacation.

So what’s going on in this picture? Well, the eye quickly finds the caption beneath it (another nod towards editorial design). Same point size and typeface as the body copy, but in italics to differentiate it. Is this actually a caption or a really small headline or the first paragraph of body copy? Who cares? It does the job, communicating the following (and leading the reader on with a great opening line): ‘This shadow belongs to a spy. We smuggled him onto the island for a very important assignment: to rate our hotels and inns.’

The rest of the copy is great. Don’t get me started on the dying art of copywriting. How else are you going to construct a compelling, persuasive argument about the merits of a product or service? But hardly anyone would approve this amount of copy on an ad these days. I’m told that people don’t read anymore. Yeah, right… you’ve just read 611 words written by an art director. Yep, it’s back to that received wisdom thing again isn’t it.

Shouldn’t we all just stop blindly following convention? That, I reckon, would be the wise thing to do.
Next: Comme des Garçons press ad