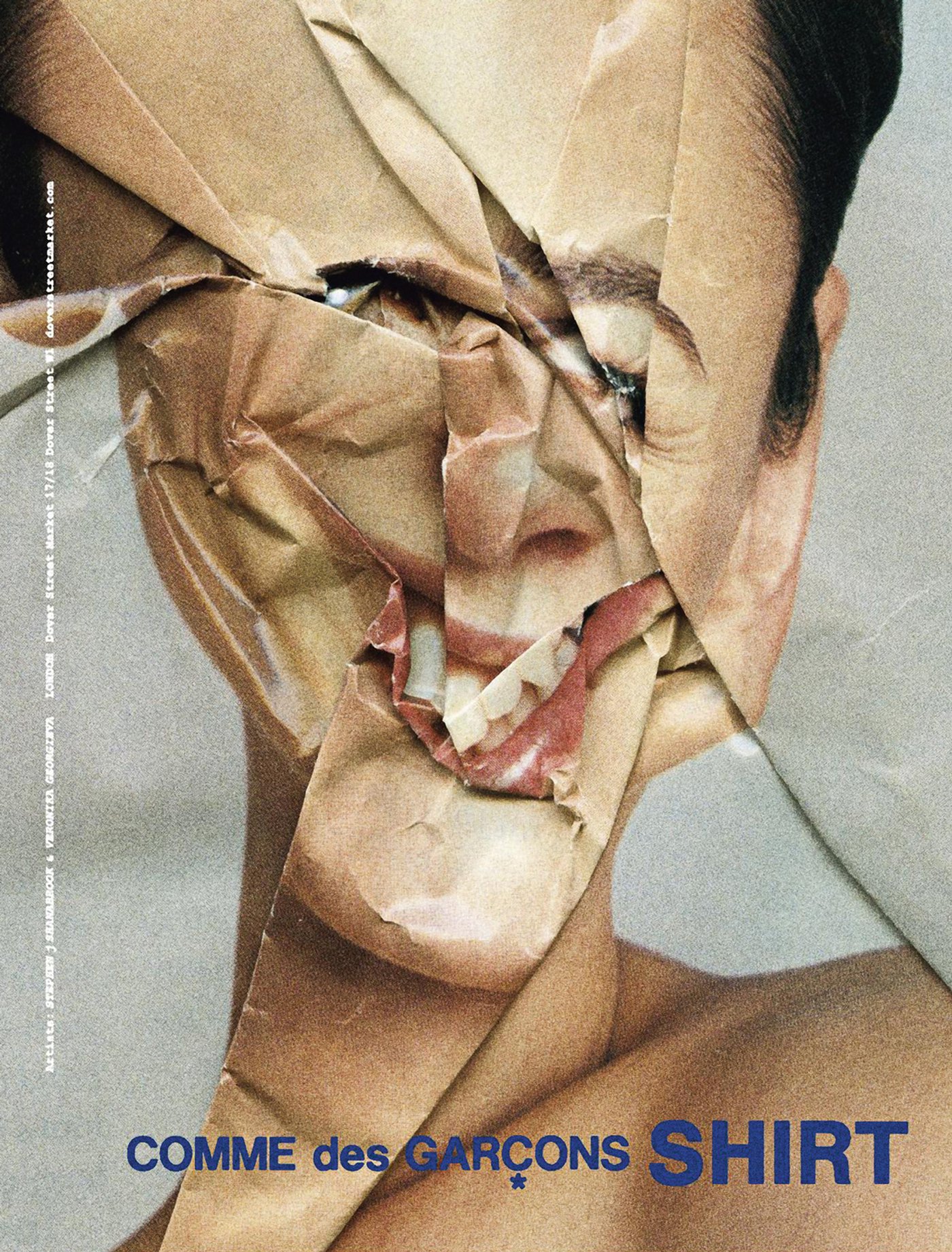 But of course advertising generally gets a pretty bad rap among the cultural cognoscenti. It’s understandable, I suppose. When they sneeringly dismiss it, they’re generally just getting confused by the banal garbage that makes up most of the ads we all see every day. It does not have to be that way.

Yes, an ad’s primary task is to flog stuff, not to improve the cultural life of the nation. But y’know, two birds, one stone and all that… in fact I would strongly argue that the more culturally relevant an ad, the better it will resonate with the viewer, the better it will work.

As demonstrated by the offering above.

I love the surreal twist. People wear shirts. Shirts crease. But let’s flip things around and show creased people instead. Not exactly your classic ’advertising idea’, but a stunning, relevant visual nevertheless. The crumpled, disfigured face of the model could also perhaps be interpreted as a comment on the darker, expoitative side of the fashion industry.

This ad is certainly going to get noticed. Because without a doubt, it will be the most memorable page in the entire magazine. That’s one of the more important things that art directors have to do, and it’s never written on the brief — create the most impactful / beautiful / intelligent page in the magazine. And having achieved just that with this ad, the Comme des Garçons SHIRT brand was surely on the radar of every reader. Job done.

But hang on, shouldn’t it show the product? No. Because somewhat counterintuitively, it would make the ad less effective. That’s because it would start to look like all the other fashion ads in the magazine. So it would be less noticeable. That piece of advertising heresy has probably just lost me any marketing directors reading this. Which is a shame, because now I’m going to big-up the big logo.

This ad has no headline, no body copy and no endline. Just a small image credit, store address and logo. And what a cool, deceptively simple sans serif wordmark it is. It’s actually a branding approach that many other fashion labels are currently copying. The asterisk / cedilha thing is also such a nice typographic touch. In the context of this layout, why on earth would you make the logo microscopically small, Cannes-scam-style? Of course if the logo was some 3-D abomination covered in gradients then we would undoubtedly have a major problem. But the type here works just great.

Yet despite the massive logo, we all know that very few clients (or creative directors), would ever approve an ad like this. They lack the vision and the courage.

So not surprisingly, this ad never went near a conventional ad agency. The image was created by artists Stephen J Shanabrook and Veronika Georgievas from their brilliant ‘Paper Surgery’ project. And it was directly commissioned by the client. Comme des Garçons has a history of partnering with artists and photographers to create their ads.

This globally successful brand simply works with great creative people instead. Now there’s a thought. Wonder if it’ll ever catch on?

It certainly helps that they have a genius at the helm, Rei Kawakubo. An untrained fashion designer who influences not just the design of the clothes and accessories, but the entire business from all the store interiors to packaging, graphic design, the advertising and yes, art.
Next: Benson & Hedges poster